The First Thing I Ever Wrote

Alrighty, here it is… this is the first “real” “story” I ever wrote. I was probably in the 8-10 range and came up with it from a Calvin and Hobbes comic. 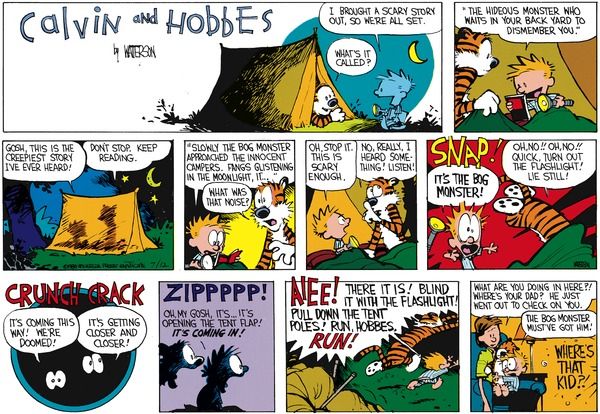 I submitted it to a school newspaper type deal and had it rejected because it was “too violent.” Pfft. C’mon now. How is a couple of kids killing a monster violent?

Anyway. Here it is.

One cold, scary night in the woods of Kremland, there lay a monster giving birth to a baby monster. But this was not an ordinary monster, oh no, this was a bog creature. With a long screech the mother bore the baby. With eyes glistening in the pale moonlight the baby let out a mournful howl at its mother and went to drinking milk. After sucking for several days, which gave the bog monster enough strength and stamina to go on for a month, he left his mother. Growing quickly the bog monster soon adapted to the conditions around it, and here is where the story really begins…………

On the first day of summer David and his best friend, Sam, were thinking about things to do.

But just like every other kid, they though of camping first. Ah, camping, ‘tis a good thing, except for when your mom makes you pack everything and tells you to wear long johns in the middle of summer and, well enough said already. But on this trip they would go by themselves. Thinking up the trip was easy. Getting everything was easy. But the thing that was hard was getting permission. It went something like this…

“Hey,hey mom. Can Sam and I go on a camping trip?”

“Honey, we’ll have to talk to dad tonight.”

“No, we will see what your dad says tonight.”

But, as it turned out both Sam and David secured permission from their families.

Under certain conditions from their mothers that all of us know and have gone through.

“Be sure to wash up every night.”

“Are you sure that there is a first aid kit in that sack somewhere?”

“Make sure that you don’t cut yourself with that knife!”

“And always wear your gloves at night.”

“Remember to say your prayers at meals.”

We could go on like this but enough said.

That afternoon, their fathers offered to drive them, but David and Sam wanted to ride their bikes in case their fathers had any last minute ideas about coming along. When they got to the site, instead of camping at the well known, Great Oak, David found a new site,

After clearing out the brush and sticks around the tent, both David and Sam went off to go hunt for firewood. Of course they stayed together just like their mother said.

After finding lots of firewood, (and splashing in the stream and trying to kill a poor bird with a knife and, enough said) David tried to build a fire, but you guess what happened, at home he grabbed the gas instead of the lighter fluid and,

They were surprised no one came to see what the noise was. But here is a coincidence, both boys liked hot dogs burnt! ( And having their eyebrows burnt off!) After settling down for the night David felt wrong, then he knew, they had to tell stories. Sam started, but before he finished both boys were asleep.

Then it came. The Bog monster approached the innocent campers, fangs glistening in the moonlight he waited for the moment to spring. Just before jumping the monster stepped on a twig.

David heard it first, then Sam.

Then the monster jumped! Just as it landed on the tent, David grabbed his rapid-fire b.b.gun and shot.

The shots just bounced off! Then he had an idea. Quickly aiming, David shot the monster ten times in both eyes.

Then it backed off.

Reeling, the monster fell to the ground.

Exhausted, scared, and to pooped to poop, the boys fell into a deep sleep.

No wonder the kids couldn’t find any animals, with a noise like the First World War.

In the morning the David and Sam went outside the tent, only to find that the monsters body had disappeared!

After a long search, the boys finally found a trail of blood leading deeper into the heart of Kremland. When they were quietly searching along the path everything was strangely quiet.

No birds chirping, nor animals rustling the brush, just that silence that makes you want to scream.

Then they saw it.

The mother that had bore the baby was seeking revenge on those who killed him.

She jumped! The boys, in turn, jumped out of the way!

She just missed Sam when she landed! Calmly, David pulled out his gun and shot the mother in the eyes.

He did it again.

Then she went down twitching and turning.

After digging up the other body, making a stretcher, and getting all the things the boys returned to town where they turned the monsters over to science.

One day in the late Spring Sam and David received calls from the scientific institute requesting that they come for a visit.

At the institute they were led, without their parents, into a secret holding lab where they were told that the monsters they had encountered were the last of the species which had once existed all over the world.

They were also told that no one had ever survived an attack by one of these monsters, and it was only by cunning that people were able to destroy them.

As payment for their miraculous deed, David and Sam were awarded $50,000 dollars each and the key to the city.