Excerpt from Surviving the Fall #8: The Edge of the Knife 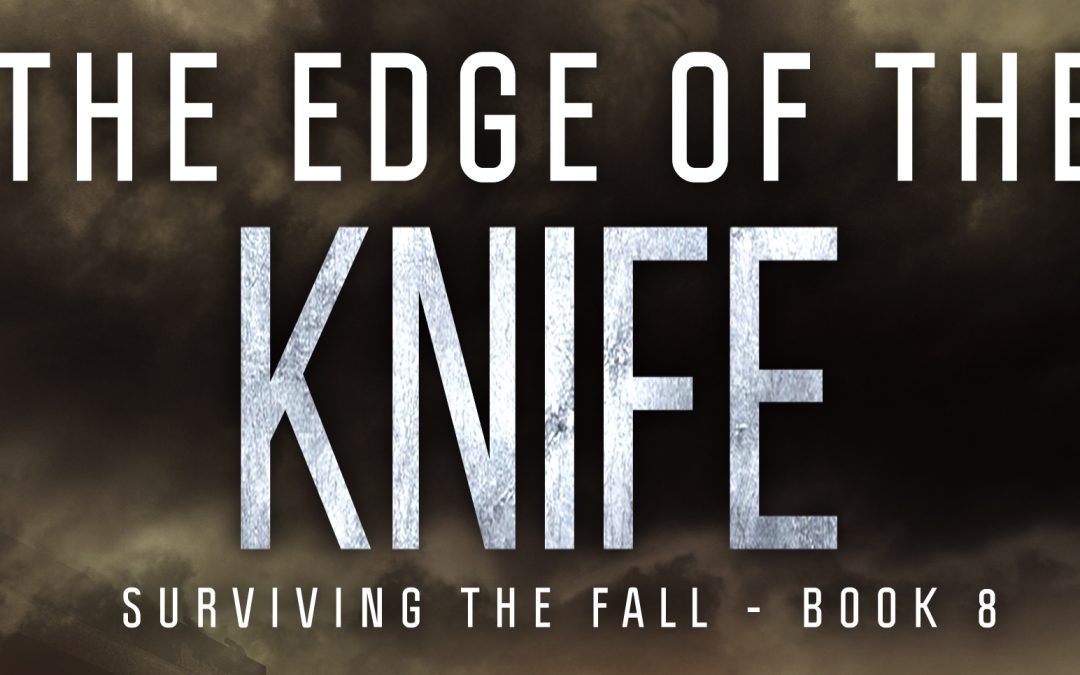 “Houston? Houston, can you hear us? Jacksonville? Can anyone hear us?”

Ted Wilkins shakes his head. “Nothing. It’s like the satellite relay system is gone.”

Jackie Frey looks back out the window as she watches the surface of the earth. “The fires are spreading. There’s smoke all across the panhandle now.”

“What could be going on? We had comms until, what? Three hours ago?”

“Got anything yet?” Commander Devin Palmer drifts into the room, reaching out and grabbing onto handhold to stop his forward momentum.

“Nothing yet. I think something’s wrong with the TDRS. I’m getting nothing from any of the satellites. No static, no keepalive signal, no nothing. It’s like they’re just… gone.”

“I was able to get a visual lock on four of the relay satellites and seven others in higher orbits. They all appear dead, though.”

“They’re tumbling. Orbits are destabilizing. Some’ll burn up in a few days. Probably a few weeks for the others I saw.”

Ted’s eyes widen as he realizes what Devin is saying. “Did someone send them kill commands?”

Commander Palmer shrugs. “No clue.” He looks over in the corner of the room. “Did you try the emergency radio bands?”

Jackie nods, still looking out the window. “For an hour straight. No response. There’s plenty of static out there but nobody’s transmitting on anything that we can pick up.”

Commander Palmer gently pushes himself toward the window and whistles at the sight of the southeastern United States below. “Look at that smoke out in the gulf. Are those rigs that are burning?”

Jackie nods again. “I think so.”

“Holy hellfire. What’s going on down there?”

“Uh… Commander Palmer? You want to come take a look at this?” Ted wipes his arm across his brow, his nervousness and trepidation growing by the second.

Ted points to an image on the screen of the laptop he’s working at. “I just saw a flicker in the O2 tank sensors. They were showing empty for a split second, then they were back. Then there was a surge in the main computer controls, like it was working overtime for a minute before going back to normal.”

“Hm.” Commander Palmer pulls himself in front of the computer as Ted drifts to the side. “You run a diagnostic?”

“Not yet. This happened just now, when you two were talking.”

Commander Palmer taps on the keyboard, paging through the software that shows readouts on all of the systems running on the space station. At first glance everything appears normal, at least until Palmer starts digging deeper into the systems. Strange fluctuations in pressurized tanks, voltage changes in key electrical systems and seemingly random spikes in the main computer system.

Twice the size of the ISS, the ISS-2 has been online and manned for six months and has already served as host to several civilian and politician visits and countless scientific experiments. The original ISS is still in orbit, though it is unmanned and offline, with plans to decommission it in the works. Only three astronauts—all American—are onboard the ISS-2, though five more were scheduled to arrive from Venezuela, Russia and China within the next four to six weeks. Being slightly understaffed on the ISS-2 has not proven to be a problem for the three astronauts as they have had many automated and upgraded systems at their disposal, making the ISS’s systems look primitive in comparison.

“I don’t understand what’s going on.” Commander Palmer turns back to look out the window. “But it’s got to be related to that. Maybe war?”

“It doesn’t look like it.” Jackie shakes her head. “There are fires across the globe. Most of the major cities look like something bad is happening. It seems to be country-agnostic.”

Jackie shrugs. “I don’t see how. Maybe? But how could it be coordinated world-wide?”

Palmer is about to respond when the lights in the room flicker for a few seconds before shutting off entirely. The whine of a compressor in some distant part of the space station slowly dies off, leaving the room shrouded in darkness and silence.

“What the hell? Where are the emergency lights?” Using the bit of light coming from outside the station Palmer makes his way to a small cabinet on the wall. He pulls out a pair of flashlights, throwing one of the lights to Ted while motioning to Jackie to follow him. “Ted, get on the computer and see what’s going on. Jackie, I need you with me. Let’s see if we can get some lights on in here.”

“Computer’s dead, Commander.” Ted slaps at the keys and pushes the power button for the monitor on and off but nothing happens.

“Merde.” Palmer curses under his breath. “Okay, with system power offline we need to check the breakers and relays first. Ted, you head down and check those. Jackie, get your eyes on the reactor and see if there’s a problem with it. I’ll go up to control and see if anything is showing up there. Use the pipes to communicate.”

“On it.” Ted and Jackie pull themselves through a tube in the ‘floor’ of the room, heading to the panels that house the main power breakers for the space station. Commander Palmer, meanwhile, proceeds up into the control room. He pulls a flexible tube close to his face and speaks into it.

“Got anything down there?”

A hollow, tinny voice echoes back through the tube. “Give us just a second. We’re checking the last row of them now.” There is silence for a few more seconds and Ted’s voice comes through again. “Nothing. Absolutely nothing. No problems, no issues, no nothing.”

Palmer glances across the instrument panels, toggling switches as he flips through a thick notebook filled with emergency checklists. “I’m getting nothing from up here, either.”

“Commander?” Jackie’s voice is distant, but filled with stress and alarm. “I think I found the problem.”